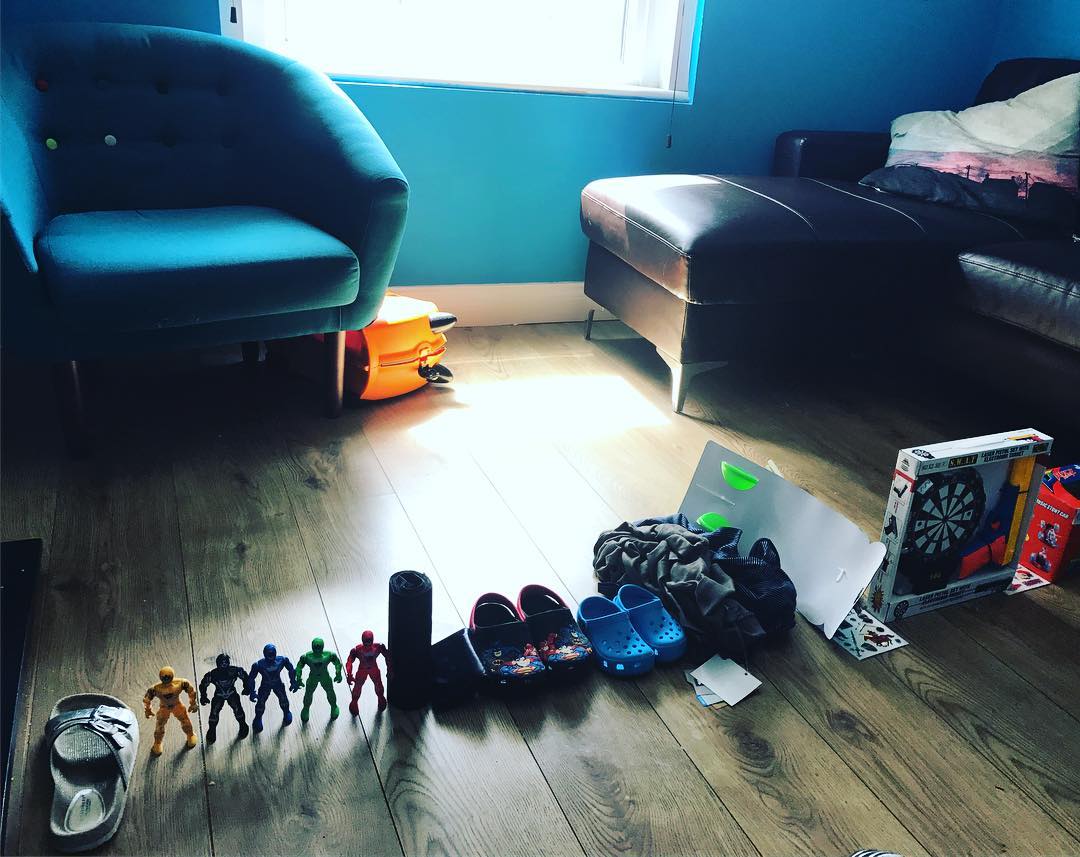 Welcome to my first blog post!!  I must admit, I have thought about writing a blog for a while, but have been procrastinating! But today, I’m just going to do it.  Getting my thoughts onto a page can only help this journey that I’m on – and if I connect with a few people out there who are going through the Autism rollercoaster, then its been a success!!

Our parenting journey has been a bit of a wild ride for us (I’m sure for many others too!). I have two bouncy boys, Monty who is 6 and Theo who is 2.5.  6 years ago, when I was pregnant, I was one of these smug women who bloomed in pregnancy! The ones, that I envied when carrying Theo………I didn’t bloom with him, I was so ill and looked like I’d been dug up!

His birth was difficult, but he arrived safe and sound.  He was a tiny, delicious, blue eyed, blonde haired bundle of delight.  Indeed, as many of us do, I was catapulted into Motherhood without a clue what I was doing for a good while, I felt like I was wading through treacle in a haze of baby vom and strong coffee. A bout of Post Natal depression (that’s a whole different post!!) didn’t help, but after about a year, I thought……finally….” I got this….”

However, I had a nagging feeling about Monty’s development that wouldn’t shift.  I’d take him to playgroups and began seeing difference between him and other children of the same, or even younger age. I’d see other toddlers babbling, pointing or engaging with their carers, communicating with eye contact or sharing toys with them. Monty didn’t really play with anything, he often looked vacant or just sat and grizzled.

Pandemonium ensued if there were any loud noises – he’d cover his ears and have a meltdown which was far beyond the ‘normal’ realms of a toddler tantrum.

This went on for a few months and as he got older he was making no attempt to walk – when he ‘furniture surfed’, he did so on his tip toes and he never would never put his foot flat on the floor.  He’d sit outside and throw stones at the fence for long periods of time, trying to transition him onto another activity would be met with fierce resistance. He would fixate on anything with lights or music (my sanity was questionable by this point……Baby Einstein has a lot to answer for) and constantly turned switches on and off. Then there was the walking. By 18 months there was no attempt to stand unaided, or put one foot in front of the other.

He had no words.  Of course, this is not unusual for toddler, and many are late to talk. But speech and communication are different things. He wouldn’t actually communicate non verbally either– by that I mean there was no pointing to draw my attention to objects. He had limited eye contact and found engaging with others difficult. He began using my hand to drag me to what he wanted rather than pointing. He couldn’t understand any instructions, even ‘no’ when he embarked on something dangerous. Many toddlers may be late to talk, but the difference with Monty was, there was no attempt at communication or any understanding of the spoken word.

I knew nothing about Autism, but something prompted me to take him to the doctors.  In the back of my mind I knew.  I did a bit of research and things seemed to ‘fit’, but I was hoping the doctor would dismiss my concerns and send me on my merry way.  After all, he was only 18 months and still developing. But she didn’t and we were referred to a Paediatrician

A year of assessments and appointments ensued.  After the first Paediatrician appointment Global Developmental Delay was mentioned, but so was a possible ‘Social Communication Disorder’ for which further assessments were needed. I don’t remember much about that year, it’s a blur of confusion, anxiety, frustration and isolation.  No-one else I knew was going through this, nor did I know anyone who’s been through it. Whilst everyone told me, ‘he’ll be fine’ and the dreaded words ‘all children develop at their own pace’…………I knew. Peoples words of reassurance felt trite and meaningless despite them being well meant. What we were going through felt devalued. I was his Mother, and I knew he had Autism.

In January 2013, my gorgeous boy was diagnosed with Autism ( Autistic Spectrum Disorder) Although I knew it was coming I was heartbroken. This wasn’t how motherhood was supposed to be.  This wasn’t the future I wanted for my darling boy. I was so angry and hurt, but I didn’t know why at the time. But with that was a felt a sense of relief that he would get some help. So I pulled my big girl pants up and got on with it, silently dying a little more inside when his nursery peers began chatting away or they played with their toys appropriately or pointed things out to their parents – I wanted to experience that part of parenthood. At this point, I didn’t know what Monty’s future would hold and tried to hold it together for the sake of my boy.

People said to me that his Autism diagnosis was for too early. He was 2 months off his 3rd birthday. But he had early intervention, speech therapy, group therapy and as parents we were sent on courses to try and help our son, and us, manage his day to day life. Monty is now 6 and despite areas in which he clearly struggles, he is at mainstream school, he is verbal and is beginning to make a few friends. He is also very clever. He loves football. I am beyond proud of him. If I hadn’t have got him diagnosed so early, his journey maybe completely different.

It took me 4 years to decide to try for another baby. Quite frankly I was blooming knackered, scared of the birth, scared of getting PND and above all scared I would have to go through this journey again.  But Theo came along in April 2015.  He is the prettiest little boy, with ringlets, and big beaming smile and eyelashes about a metre long. Imagine the relief when at his one-year check, all was fine, and he was developing just fine. He babbled away like there was no tomorrow and was an incredibly social baby!

The months went on and by the time he was 16 months old, those old feelings and thoughts returned. Perhaps I pushed them aside, denied them, but knew what I had to do. In February this year, I took him to the drop in Health Visitor clinic and said, ‘I think Theo has Autism……” …………. the floodgates opened, and I sobbed like a baby in front of these poor Health Visitors.

So here we are, going through the process again. But this time, I don’t feel relief at the moment that he is getting help early and being assessed for Autism. I feel grief and pain. I feel so bloody angry at times, I can feel the pain in the pit of my stomach. I feel envious of those parents who will never have to go through this once, let alone twice.  It seems so unjust. I feel grief that I will never get to experience what it is like to have a toddler who laughs and points whilst babbling “Mummy look…. car!”

When Monty was diagnosed with Autism, someone gave me this short story to read. At the time, I didn’t fully grasp its true meaning, but 4 years later, it encompasses much of how  I feel………

I am often asked to describe the experience of raising a child with a disability – to try to help people who have not shared that unique experience to understand it, to imagine how it would feel. It’s like this…

When you’re going to have a baby, it’s like planning a fabulous vacation trip – to Italy. You buy a bunch of guidebooks and make your wonderful plans. The Coliseum, the Michelangelo David, the gondolas in Venice. You may learn some handy phrases in Italian. It’s all very exciting.

After months of eager anticipation, the day finally arrives. You pack your bags and off you go. Several hours later, the plane lands. The stewardess comes in and says, “Welcome to Holland.”

“Holland?!” you say. “What do you mean, Holland?” I signed up for Italy! I’m supposed to be in Italy. All my life I’ve dreamed of going to Italy.

But there’s been a change in the flight plan. They’ve landed in Holland and there you must stay.

The important thing is that they haven’t taken you to some horrible, disgusting, filthy place, full of pestilence, famine and disease. It’s just a different place.

So, you must go out and buy a new guidebook. And you must learn a whole new language. And you will meet a whole new group of people you would never have met.

It’s just a different place. It’s slower paced than Italy, less flashy than Italy. But after you’ve been there for a while and you catch your breath, you look around, and you begin to notice that Holland has windmills, Holland has tulips, Holland even has Rembrandts.

But everyone you know is busy coming and going from Italy, and they’re all bragging about what a wonderful time they had there. And for the rest of your life you will say, “Yes, that’s where I was supposed to go. That’s what I had planned.”

The pain of that will never, ever, go away, because the loss of that dream is a very significant loss.

But if you spend your life mourning the fact that you didn’t get to Italy, you may never be free to enjoy the very special, the very lovely things about Holland.

Holland is beautiful and all, and I have had some amazing experiences, and extreme highs and lows.  But I  feel that everyone else is in Italy without me.  I feel everyone I know is together there having a wonderful time.  I just wanted a chance to be there too. This is why I started this blog, to reach out to people, to support each other – I’m sure every parent at some time or another feels someone else is doing it better than them. The truth is, we all have our low times – the main things is talking about them and listening others stories with empathy and support

I feel very lost at times, raising one child with Autism is hard, raising two seems impossible right now.  Having two children with Autism certainly is a daunting prospect. But this is our journey and our reality. Just like many other parents have their reality and their battles to fight  Yes, we are tired, yes, I feel angry at the unfairness of it all and yes sometimes I cry until I can’t breathe, but I will never stop fighting for them. I will carry on enabling them to be the best they can be. I adore my boys and Holland is such a beautiful place – and there is so much yet to discover.