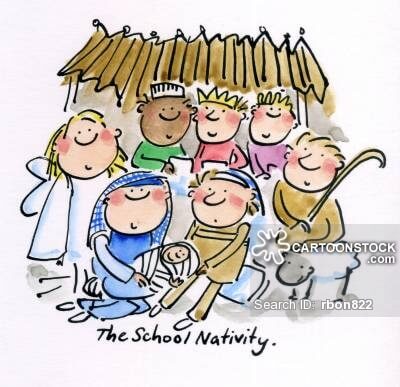 As parents, we all love them don’t we?  The school Christmas Play.  Seeing our precious children up on stage, sporting make-shift shepherd wear out of tea towels and dressing gowns. Lovely stuff.

Today was Monty’s Christmas play.  I don’t think I’m alone in saying, he told me nothing about it. Zero.  All I knew was there was singing, had to wear something festive and the performance started at 2.15pm.  I nearly forgot the ‘something festive’ and so I wheeled out his gold tinsel cardboard head piece from Year One. The tinsel was coming loose at the back, but hey, it was festive.

It’s been a tricky few weeks with him.  He’s not been quite himself, very quiet, irritable, almost ‘Kevin The Teenager’ like. He has also been very volatile and its hard to try and piece together why he is feeling out of sorts. It’s like playing detective and hitting a brick wall.  He is still learning to communicate his feelings but it’s so hard for him.

Outwardly at school he has been fine, but at home I’ve found myself treading on eggshells. After teasing bits of information out of him, gently persuading him that ‘a problem shared is a problem halved’, he told us he was nervous about the school play.  Bless his cottons.

This morning was particularly hairy, he didn’t want to go to school. Refused to do anything involving getting ready for school, just avoided all demands by kicking a small rubber ball all over the living room. I got him to school, admittedly a little late, as all the festive adorned Year 2’s were lining up ready to go into the hall for the morning performance. He joined the queue with no fuss, trotted off with his gaudy gold headpiece and off he went.

It’s like the last 24 hours never happened. It’s like all the explosions, the agitation, the ‘Kevin’ moments didn’t occur.

Imagine my delight when my friend who saw the morning performance text me to say Monty had a line in the play and he did brilliantly.  I was beside myself. 2.15pm came and I was poised in anticipation for this wondrous moment. Monty’s first ever line in a play! Mind you my delight waned slightly as some seat hogger had put their bag on the only available seat in the front row……….” sorry, I’m saving this seat………..”.  No no no no no! Tough titties.  They are late! I’m sure there are rules about this kind of tomfoolery. Least of all some sort of nativity etiquette….no?

I huffed away from aforementioned seat hogger and stood at the side. The performance began, and all these little dears began singing. I welled up, I couldn’t help it. It was delightful, and my boy was stood there, doing little dances now and then whilst mouthing a few words.

I didn’t know when his line would come so I was concentrating hard. I got distracted for a second and he said it. It was so quick, I missed it.  I was gutted. Then someone accidentally set the fire alarm off (as you do) and we were all evacuated onto a soggy, wet field…………………….mid chorus.

I felt horrible. I missed it. But the fact remains he did it. No matter how quiet he said it, how fast…………he bloody stood up, in front of all those parents and children and said his first ever line of a school play.

I now realise why he was so agitated. It can’t have been easy for him. He was harboring these feelings and worrying about them, without being able to communicate why he felt so nervous.  Perhaps he didn’t understand his feelings.  Who knows. But my point is, he faced a huge challenge and he did it. He coped. He dug deep, and he found his way.

Despite it being a nightmare at times, I am a firm believer in exposing Monty to things he finds uncomfortable. There are a lot of things that can spark off anxiety, which in turn creates a hellish situation at home. Social situations are a big trigger for him. But life is going to throw up these uncomfortable situations. As an adult I constantly face anxiety inducing moments and have learnt (and still learning) different coping mechanisms to deal with it. The road might be longer and tougher for a child with ASD but eventually he will have his ways of dealing with stressful things, and as his Mum, I want to help him find those ways.

So, despite still reeling from ‘the greedy seat hogger”– today has been a good day.

Note to self for next year. Take every handbag I own and place them along the front row. Clearly this Christmas play viewing lark is more of a cut throat affair than I’d anticipated……………….